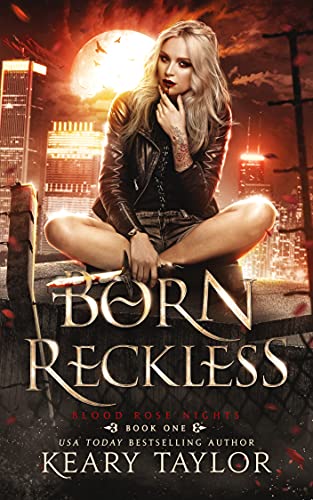 By: Keary Taylor
“You can’t turn someone into a vampire, at least not the kind we are. You have to be born this way.”
Genre: Library | Paranormal Romance
Series: Blood Rose Nights
Pages: 278
Urban Fantasy | Vampires
Amazon Books

I thought I was being noble when I put myself between my best friend and the switchblade of a mugger. Turns out Elena could have split the guy in half with her bare hands, and she did while I bled out on the sidewalk.

It should have been game over, but I woke up with newfound strength and a terrifying craving for that sweet, sweet smelling liquid pumping through your veins. Too bad my first taste ended a woman’s life and gained me an enemy who swears to make me pay.

Enter Mason Godfrey, Elena’s brother. He’s given me an ultimatum. Go back to my life, back to my medical residency, and most likely be hunted down—or come away with them to Chicago and start over. The golden, still-human prince of the city is impossible to resist. Despite the herd of eligible and eager bachelorettes who would rather see me dead than on his arm, his eyes keep lingering on me. Neither of us has forgotten that one magical night we had, right before my first life ended. Where does this lead, now that I’m a vampire and he isn’t?

They say Chicago is a safe haven for our kind, but it is nothing like I expected. This new life is filled with luxury and money. There are galas and vampire night clubs, enchanted tattoos, and a council of powerful immortals. But I must never forget. Despite this glamorous second chance at life, I’m still being hunted. And time is ticking until I make a reckless move. Because it’s what I do.