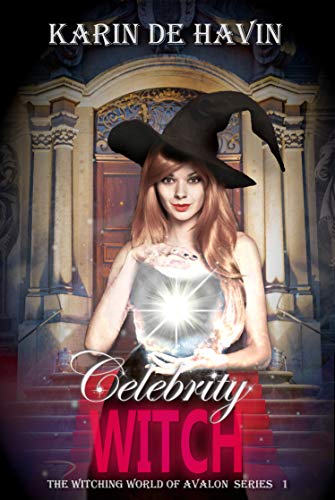 By: Karin De Havin
Teaching celebrity kids should be an awesome job, so why does it feel like a nightmare?
Genre: Library | Paranormal Romance
Series: The Witching World of Avalon
Pages: 158
New Adult | Witches
Amazon Books

Avalon took a solemn oath: starve to death before resorting to teaching. After all, she’s a witch and they have standards. But when faced with reality and a zero balance in her bank account due to her lack of conjuring skills, she takes advantage of her best friend’s Beverly Hills connections and lands a job at the Woodbridge Academy, teaching art to spoiled children of celebrities. Avalon discovers a world she’s only read about at the checkout stand. Hollywood trophy wives, A-list actors, and even Mr. Sexist Man Alive three years running.

The students prove not nearly as glamorous and almost impossible to teach as they sit texting their agents and using the art supplies to apply fake tattoos. Avalon can’t use her powers, or else she’ll turn her spoiled rotten students into toads. Already at her magical wits end, life only becomes more complicated when Mr. Sexiest Man Alive becomes her confidant, the Headmaster takes interest in her, and one of the students becomes obsessed with her. To top it off there’s a severe threat to her coven from the dark elves.

Can Avalon keep her witch sanity and her magic a secret, or will she blow everything and lose her job and be stripped of her witch powers?