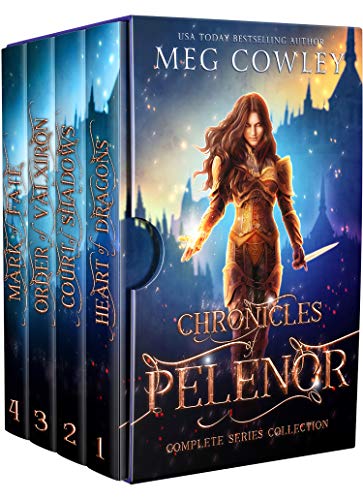 By: Meg Cowley
She stole a powerful artefact. He resurrected an ancient evil. They are mortal enemies and only one can survive… but both of them may be doomed in this heartrending saga of intrigue and betrayal.
Genre: Fantasy | Library | Teen & Young Adult
Series: Box set
Pages: 1200
Sword & Sorcery
Amazon Books

When orphan Harper takes a legendary Dragonheart, she unwittingly signs her own death warrant. Searching for the elven king’s missing Dragonheart is his ruthless spymaster Dimitri – who has his own secret agenda to revolutionise the Kingdom of Pelenor – but the Dragonheart is only the beginning.

To further his cause, Dimitri raises a revolutionary from beyond the grave. He realises too late that he did not raise an ally… but a dark, ancient power, hell bent on revenge. And Dimitri is bound to his cause.

Trapped and thrust into the middle of rising conflict, Harper and Dimitri are forced to ally to survive. When Harper unexpectedly uncovers her identity, the truth will pit all against her, for Harper holds great darkness within her, yet, she is the crux to prevailing against the oncoming cataclysm.

War comes for Pelenor. The Dark One will have his dominion. The ultimate sacrifice will be required – but who will give it, and will it be enough?