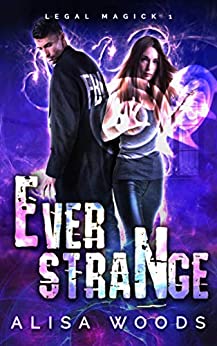 Zane Walker’s undercover in Chicago’s deadliest drug cartel—and his magic is as dirty as the enhancers they peddle. When a beautiful witch storms in, making demands she thinks she can back up with magick, he’s forced into a split-second choice… and his monster rages out.

Ever Strange’s father was murdered. They made it look like an overdose, but Asher Strange, world-renown med-magick researcher, would never take tawdry magick enhancers. But before she can get an autopsy, her father’s body disappears… and being one of the richest witches in the city means she will get answers.

Someone’s putting deadly magick into street drugs… and it’s killing people all over the city. Zane’s magick is monstrous, and Ever’s power brings out his beast. But she insists on finding her father; and keeping her safe has suddenly become his job—on top of stopping an epidemic of overdoses that just might be cover for a serial killer. Together, they work to stop the dark magick that’s stalking the streets of Chicago… and try to keep their own secrets from consuming them both.