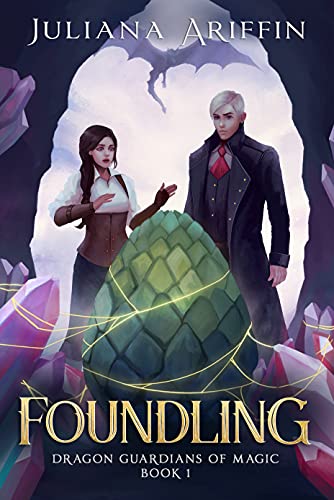 By: Juliana Ariffin
Everyone knows dragons have disappeared and magic is fading. But when an orphan stumbles across a secret dragon egg, it soon becomes apparent... that what was once lost in the world may yet be found.
Genre: Fantasy | Library
Series: Dragon Guardians of Magic
Pages: 290
Dark Fantasy | Mythical Creatures | Sword & Sorcery
Amazon Books

When a railway magnate discovers a rare magical mineral under the temple she grew up in, Peri does all she can to save her home… and ends up stumbling across the last thing she expects to find:

A dragon egg that calls to her alone.

Magic and dragons have long been fading from the world. But Peri can’t just stand aside and allow the precious egg to be used for profit. So together with Roy, the handsome heir of Sterling Rails, and a talking goose called Salt, she goes on the run to seek sanctuary at the Golden Temple in their capital city.

But the egg’s magic is no longer secret, and neither are Peri’s slowly surfacing magical abilities.

Together, their magic draws out a secret society of magical folk from Kalin’s underworld, and sets in motion a sinister plot that threatens the highest echelons of power in the realm.

Can Peri save her kingdom before it’s too late? And more importantly… does she have what it takes to hatch a dragon?