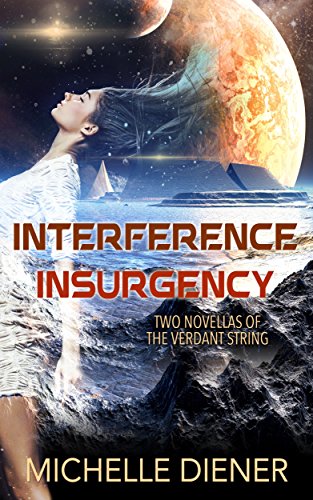 While the people of the Verdant String know they have a common ancestor, a group of explorers who colonized the planets at the same time a thousand or more years ago, the mysteries of who they were, and where they came from, persist.

Interference (A 25,000 word novella introducing the world of the Verdant String)

Interference can go either way . . . The tiny moon of Cepi is on a countdown to destruction, and while Nyha Bartali has been persuaded to take her four wards for a final look at the archaeological wonder, now she’s eager to leave. The only problem is, someone has other plans–plans to exploit Nyha and the girls in her care in order to give themselves time to steal Cepi’s secrets.

Mak Carep knows his team’s presence on Cepi is the last flex of his planet Arkhor’s muscles before the moon is blown to bits. Arkhor has interfered on Cepi since it discovered the ruins four hundred years ago, but sometimes, interference can have unexpected consequences.

When Nyha and her girls are taken hostage, Mak and the rest of his special forces team are the only ones who have any hope of rescuing them, and they’re ready and willing to do what Arkhor does best . . . Interfere.

Interference was first published in the Orphans in the Black Anthology in July 2017.

Insurgency (Insurgency is a 45,000 word short novel set in the Verdant String series)

The Parnian city of Var is under siege. Buildings are being targeted by insurgents whose only aim seems to be destruction. Nick Bartega is part of the Protection Unit team investigating the explosions, but with no discernible pattern, and no one taking responsibility, he and his colleagues have hit a blank wall.

That is, until his neighbor, Tila, is caught up in the first real mistake the insurgents have made. Cornered, forced to take Tila’s whole office hostage, the insurgents are surrounded and out of options, until they use Tila as their shield.

Tila sees herself as Parnian first, Halatian second, but her dark blue hair, and the strong emotions her very existence provokes in others means the insurgents see her as the perfect hostage. No one on Parn wants to give the order that might catch her in the crossfire. They’d rather let the insurgents get away.

But Nick, and his commander, Drake, see the first glimpse of a pattern in the insurgents’ behavior. Not that long ago, Halatians were used as hostages in another incident on the tiny moon of Cepi, and the parallels are hard to ignore. So is this attack on Var an isolated incident, or is there a bigger conspiracy at play? Whatever the truth, Nick isn’t prepared to leave Tila in the insurgents hands. And he’s prepared to break any rule, and disregard any order to do it.