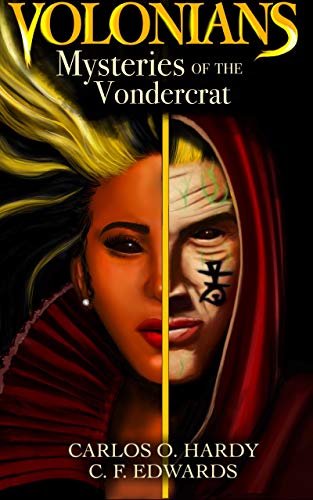 Volonia. A magical and regal planet. Powerful Witches and Warlocks live beneath the surface and protect Volonia’s magical secrets. They have lived in peace for eons, performing powerful rituals, and using their magic to make the society prosper.

But now, something is stirring in the ranks of the lower class of Volonian people. A resistant movement that threatens to ruin their peaceful way of life. The danger of a civil war breakout is close.

The opposing sides are equal in their strengths, and both are looking for Volonia’s most coveted, powerful object that will help them turn the hands of war on their side – The Vondercrat. The House of Lords is confident in their knowledge that only they can summon the most powerful book on Volonia.

Unbeknownst to them, Varah Cutter the ex wife of Head Lord Roman Cutter,has managed to conjure this book and is now holds the most powerful book in their history in her hands. All eyes are on Lord Roman, as he has to make the toughest decision of his life. Will he Exile his ex-wife and their young twins Broc and Shenzara to a distant planet because she has conjured the forbidden book and used one of its spells or risk not being re-elected by the people who trusted him to lead by enforcing the Volonian law.. Will he make the right decision? Will the Vondercrat fall in the wrong hands?.

Will he manage to protect his family? Which side will he choose? What will Varah decide to do with the power she holds in her hands?

Follow Varah on journey to redeem her honor, save her family, and the fate of all Volonians!