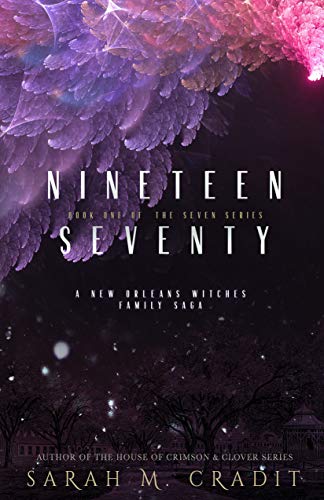 By: Sarah M. Cradit
One of the seven will die. There's nothing they can do to stop it.
Genre: Fantasy | Paranormal Romance
Series: The Seven
Pages: 258
Historical Romance | Romantic Fantasy
$0.99
Free
Amazon Books

“You definitely will not want to miss this one!”
“Seriously one of the best books I have read.”
“Exceeded every single one of my expectations.”
“The way the story unravels and weaves through the lives of the family was remarkable.”
“These characters are so complex yet so relatable that you will fall in love with them all.”
“I will never forget a single moment.”
“Mrs. Cradit has a way with words that will leave you wanting to read more.”
“I absolutely love this entire series.”
“That ending tho!!!”

1970. New Orleans. The seven Deschanel siblings live with their long-suffering mother in an historic Garden District mansion. Each of them unique. Each of them born with a gift. In some cases, a gift they wish they could give back.

When August Deschanel died, he left his wife, Irish Colleen, with more than seven children to raise. She inherited a job she was never prepared for: bringing up his heirs in a world she doesn’t understand. She’d never seen true magic, not before marrying into the most prominent-and mysterious-family in New Orleans. Now, she can’t escape it.

Irish Colleen knows a terrible secret. Her youngest, a prophet, has seen a future that is unavoidable: the Deschanels will not leave 1970 without losing one of the seven. She knows only that it will happen, but not when, how… or to whom.

One of her children must die, and Irish Colleen can do nothing to stop it.

Series List
The House of Crimson & Clover Series: Dive into the secretive, ancient, powerful world of the Deschanels & Sullivans.
The Midnight Dynasty Series: There’s no place like home.
Vampires of the Merovingi Series: From the ashes of the sorcerer kings rose an empire.
The Seven Series: Seven siblings. Seven years. Seven spellbinding novels.