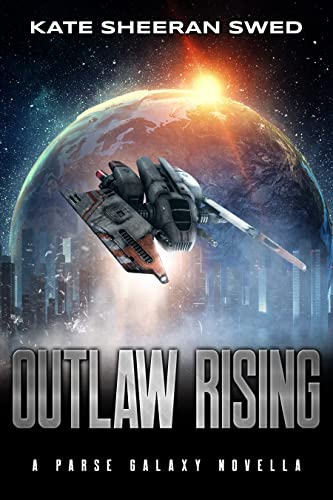 By: Kate Sheeran Swed
Sloane Tarnish has always secretly admired her outlaw of an uncle, and his tales of not-so-legal adventures across the galaxy–but she never thought she'd be asked to help with one of his heists.
Genre: Action & Adventure | Library | Science Fiction
Series: A Parse Galaxy
Pages: 101
Space Opera
Amazon Books

When Uncle Vin shows up on her med school campus with a plan to steal a chip full of Fleet intelligence–and the baffling idea to have her play a key role in the scheme–Sloane’s got her doubts. Uncle Vin doesn’t seem to realize that her top skills involve the kind of shots you drink, not the ones you fire.

But Vin’s convinced the Fleet’s got plans to install empirical rule across the free galaxy, and that this data could stop them before they can begin. When a bunch of rogue delivery drones start taking shots at her–and not the liquid kind–she has to figure he’s onto something.

To prove it, all she needs to do is steal the data key from the middle of a Fleet ball… and right out from under the Commander’s nose.