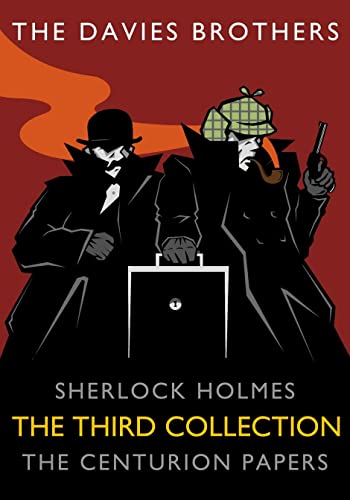 The Third Collection of Sherlock Holmes stories from The Davies Brothers, winners of the BAFTA Rocliffe New Writers Showcase (supported by the London Book Fair)…

The Centurion Papers is a thrilling new series of Sherlock Holmes mysteries. Too explosive for publication, kept hidden for a hundred years…until now.

These THREE new cases follow Holmes and Watson on the trail of their most nefarious foes yet.

The Black Widower
A letter from Italy, a jilted lover… and the hunt for a ruthless murderer. Sherlock Holmes races across the continent to catch a debonair but deadly villain: ‘The Black Widower’ is preparing to entrap his next victim – a wealthy young English lady with a trail of suitors. Surrounded by the beguiling mountains and lakes of northern Italy, Holmes must discover the true identity of the elusive killer, and apprehend him before he strikes again.

Red Silk
There is another! Dr Watson learns of his predecessor as partner to Sherlock Holmes, a man whose powers of deduction rival those of the great detective himself. Campbell Thorne left a letter detailing his final case, and Watson discovers that Holmes’s most devastating adventure may have occurred even before they met.

The Silent Soprano
Scandal at the Royal Opera House as the world’s greatest soprano is robbed of her most precious asset: her voice. Holmes and Watson are drawn into the backstage drama at Puccini’s latest opera, where they must unpick a tangled mystery involving feuding divas, a priceless diamond… and a cold-blooded killer on the loose.