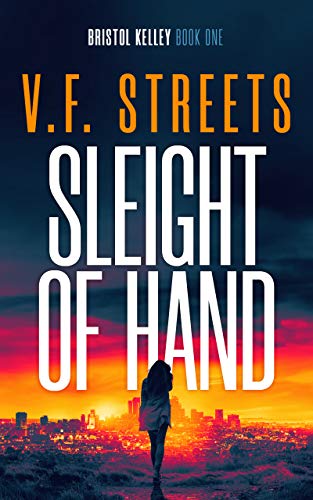 By: VF Streets
In the City of Angels, if you want to get away with murder, you call Bristol Kelley
Genre: Action & Adventure | Thriller
Series: Bristol Kelley
Pages: 320
Crime Action Fiction | Vigilante Justice
$11.99
$0.99
Amazon Books

She’s an expert at manipulating the facts of a crime scene to tell whatever story her guilty clientele is willing to pay for. But when she reluctantly takes on a job to frame a police detective for drugs, what she soon discovers is — she’s the one being manipulated.

With a past that still haunts her, Bristol is unable to ignore the evidence when her target turns out to be the lead investigator into the death of a young teenage girl. His push for a murder investigation has made him unpopular with some who want the death ruled an accident. But Bristol refuses to be controlled and chooses instead to double-cross her employer and enlists the help of her rival, Cole Sullivan, to get to the truth. But the deeper she digs, what she finds is that the girl is the tip of an iceberg that reaches far into her own history, and her past choices have made her the pawn in a deadly game she had no idea she was playing. Now it’s not just the lives of innocent girls at stake, but her path is leading to a reality that threatens to shatter her world and destroy the lives of those she cares about most.