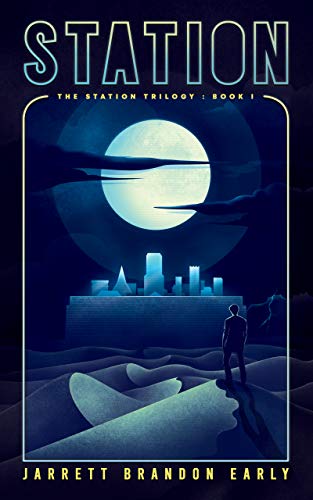 By: Jarrett Brandon Early
They were given a paradise. And filled it with nightmares.
Genre: Library | Science Fiction
Series: The Station Trilogy
Pages: 348
Cyberpunk | Genetic Engineering
Amazon Books

What is Station? A second chance? A nocturnal paradise? Or something more sinister?

When grief-stricken Marlin Hadder’s life refuses to end despite his best efforts, he unwittingly earns an invitation to Station. On its glossy iridescent surface, it’s a city of indulgence, where every desire can be satisfied through gratuitous sex, exotic drugs, and extreme surgical procedures called Elevations. But when Hadder wants a life beyond the audacious parties and shocking body modifications, he delves deeper into the sunless city, uncovering its darker mysteries.

Included among those discoveries is a violent, twisted group of residents called Risers, who have abused Station’s gifts, transforming themselves into killing machines set on bringing down the city’s massive walls. And once those walls fall, the outside world is an exposed throat waiting to be cut.

As Hadder encounters Station’s more outrageous characters, including a flesh artist, a band of behemoth guardians, and a self-appointed king of carnage, he finds himself asking a frightening question. Is Station a place where dreams are made? Or where monsters are created?

The storm clouds are gathering, the Risers are moving, and the clock is ticking. A shocking murder, a great duel, and a heartbreaking act set chess pieces in motion, forcing Hadder to convince a community grown complacent that it must fight for its city. But is Station a utopia worth protecting, or cheap theater between gods better left in rubble?