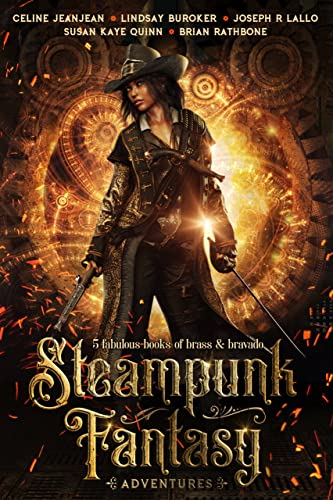 The Bloodless Assassin by Celine Jeanjean
The tropical city of Damsport clings to its independence from the vast and powerful neighbouring empire by only a few tenuous alliances. As a dreadlocked pickpocket and thief, Rory is mostly oblivious to the political stage, currently too busy blackmailing an assassin into training her to sword fight. That is, until the assassin is targeted by a plot to bring down Damsport, and Rory finds herself in the crosshairs along with him. It’ll take every bit of cunning she possesses if she’s to not only stop the plot but survive it.

Free-Wrench by Joseph R Lallo
Beyond the islands of Caldera the world is a vicious place. A terrible calamity has poisoned the land. Those too ruthless or stubborn to die have crafted steam-powered mechanical wonders and taken to the sky. Yet somewhere in that wretched land there is a cure for a dire disease. With the eccentric crew of an airship called The Wind Breaker, Nita Graus means to find that cure, whatever the price.

Third Daughter by Susan Kaye Quinn
Being Third Daughter of the Queen means Aniri is free to love her fencing instructor–until a marriage proposal from a barbarian prince forces her to choose between preventing a war and breaking her heart.

Dragon Airways by Brian Rathbone
Dragons harbor mysteries and secrets revealed only to those most worthy. When a boy who can sense ancient magic becomes valuable to both sides of the war, enemies close in. Fleeing those sent to capture him, Emmet and his sister Riette board Dragon Airways. Not knowing friend from foe, they must rely on even those who might betray them. In a thrilling journey spanning land and sea, brother and sister come to know the true measure of Emmet’s abilities along with the real value of love, friendship, and sacrifice.