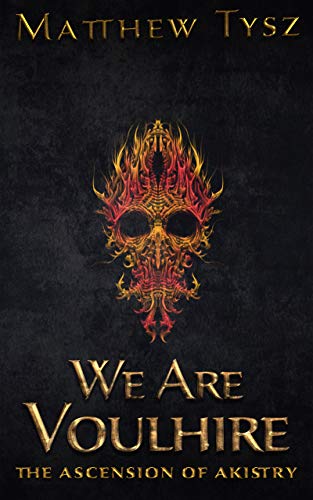 The Ascension of Akistry

By: Matthew Tysz
"When you talk about a jungle, you picture a green place: a canopy broken with sunlight shining through hot vapor. But the heart of the Dire Vine Jungle is not a green place
Genre: Fantasy | Library
Series: We are Voulhire
Pages: 263
Epic Fantasy | Sword & Sorcery
Amazon Books

“When you talk about a jungle, you picture a green place: a canopy broken with sunlight shining through hot vapor. But the heart of the Dire Vine Jungle is not a green place. It’s black. There is no sunlight. The land dips deep into the Earth, but the canopy only grows higher. You descend further into it, like you’re sinking into the ocean. The trees grow not only taller, but multi-layered, one canopy holding up another. You descend through each layer until you find yourself in a dark land with trunks as wide as street blocks and taller than mountains. Even the lowest canopy might as well be the clouds. A torch will light your body but you still can’t navigate that darkness unless you know exactly where you are and exactly where you’re going. But the things that live there, they can navigate with no trouble at all.”

And so it was that a brief civil war was followed by an uncertain calm. But as the kingdom of Voulhire tried to pull itself back together, Galen Bray was one of very few who acknowledged the suspicion of the respite.

With the church ever in the clutches of an immoral wizard, any opportunity to unseat him would seem immoral to ignore, even if that opportunity were presented by the Emperor of Lullabies himself.

Hidden in Voulhire’s darkest and most dangerous recesses, there lives a prophet from times of old. Once a subject of reverence, years of suppression by the church have banished his legends into obscurity.

But there are those who still remember.