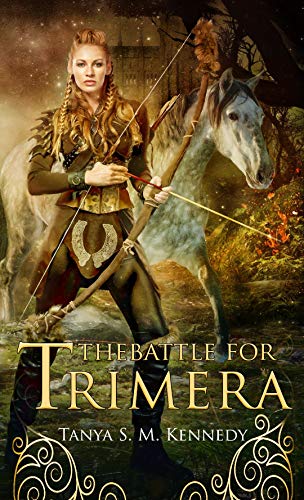 The Battle for Trimera

By: Tanya S.M. Kennedy
Her future was assured. But bloodshed made her an orphan. Can she unlock her power and save the land from doom?
Genre: Action & Adventure | Fantasy | Library | Teen & Young Adult
Series: Stand Alone
Pages: 474
Coming of Age
Amazon Books

Princess Pria is unconcerned with her high-born destiny. A precocious child, all she knows is that she’ll be loved and coddled until she’s sent to study with the priestesses who protect the realm. But after the ruling prince and his royal wife are viciously murdered by savage beasts, the grief-stricken girl is kept close by her protective older brother despite her dangerously growing magic.

Deciding to accept her duty and leave for formal training at age twelve, Pria returns home a decade later but struggles with the intense scrutiny of a people desperate for her protection. But she soon learns the brutal monsters that slew her parents are controlled by a sorcerous rogue… and she’s the next target for his bloody revenge.

Inexperienced and under pressure, can Pria defend her kingdom against a fearsome foe?