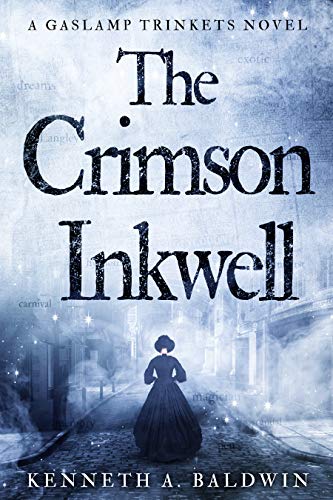 Before he died, my father taught me the world was solid. Hard facts. Logical inferences. That’s what good stories are about. Then again, I wasn’t exactly an award-winning reporter so what did I know?

When Detective Edward Thomas told me he had seen a phantom, something woke up inside of me. I could have tried to dismiss it as a trick of the lamplight, but how else could I explain the body on the cobblestones?

Instead, I simply believed him, and not just because he was arrestingly handsome. I was engaged after all to a sensible, though older man–the same man who published my pathetic excuses for articles, in fact.

No. I believed him because somewhere, deep down, I knew magic was real. What’s worse, I knew it was a part of me. The detective’s ghost story had just woken me up.

As soon as I accepted this truth, everything changed. My writing career, my family, my domestic prospects, and my freedom. Perhaps something was bound to change. What woman, pray tell, can fit three men and a writing career in her life and still keep her sanity?

Byron was my fiance. He was sensible. He could provide a modest life of means for my sister and me. He could also continue to publish my little articles in his weekly magazine. He adored me.

Edward was my detective. He was so good and true, straight as an arrow and noble as a knight. He inspired me to be something more, but I could never live up to such a high standard.

Bram was my mystery. Who could say where his life had taken him before he met me. Everything he did was curious. I was drawn to him in ways I didn’t understand.

Could I escape this journey with my engagement intact? Which course would lead me down a road to the woman my father always believed I should be?

And why did I feel so angry all the time?

My fingers still have that enchanted twitch even as I peck these words out on an old typewriter. Before another episode comes, let me tell you what happened that fateful autumn in Dawnhurst-on-Severn. . .