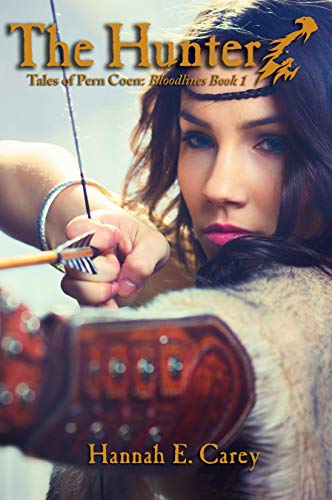 Forced to flee her uncle’s palace in the dead of night in order to save her own life, Duchess Rhiannon of Solis finds herself pulled into an ongoing war. She seeks safety on the shores of the island of Pern Coen, though she knows little of the strange land and its even stranger Spirits. A stroke of fate leaves her at the mercy of a band of rebels led by a notorious outlaw, a man the people of the island call the Hunter.

Conor has lost his family and his home. Forced to live in exile, he dreams of the day that the people of Pern Coen win back their freedom. He has no love for the Empire of Kelnore, but when he finds an injured Kelnorian noblewoman, he can’t bring himself to abandon her. Against his better judgement, Conor offers Rhiannon his protection, but the more time he spends with her, the more he finds his feelings toward her shifting. He’s already had his heart shattered once, does he dare take that risk again with a woman who should be his sworn enemy?

The longer Rhiannon spends with Conor and his band of outlaws, the more she finds herself torn between the life she knew and the life she has discovered on the island. Can she turn her back on all she’s ever known? And can a rugged outlaw capture her heart?