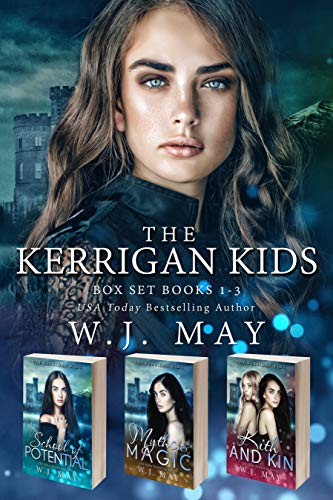 By: W. J. May
How do you save the world, when it's already been saved?
Genre: Teen & Young Adult
Series: Box set
Pages: 528
Coming of Age | New Adult | Superhero Fantasy
$4.99
Free
Amazon Books

How do you save the world, when it’s already been saved?

Eighteen-year-old Aria was supposed to have it all. A tight-knit circle of friends, a loving family, and a magical tatu on her lower back that gave her every superpower under the sun. When it came to the battle between good and evil, she was ready to do her part. There was just one little problem.

Trapped beneath their parents’ legacy, Aria and her friends find themselves restlessly pacing the halls of Guilder University, desperate to come into their powers, desperate for whatever comes next. The months blend together, each more monotonous than the next, until one day, no different than any other, a mysterious stranger comes to school.

Determined to uncover his secrets and driven by a fierce need to prove themselves, the new gang does whatever it takes to show the rest of the world they’re ready. But that readiness comes at a cost.

Will it be a price they’re willing to pay?

It was a trial by fire…

When a vicious murder rocks the Guilder Boarding School, Aria and her friends find themselves on shaky ground. When everyone has motive, everyone’s a suspect. And thanks to a public brawl with the victim, Aria Wardell was seen to have more motive than most.

While fending off a ward of accusations from both the students and the faculty alike, Aria struggles to find balance in her life amidst the shocking development of some new powers. A new group of shifters on campus raise more questions than answers, and no matter how the world is crumbling around her, she can’t get a certain moonlit kiss out of her mind.

Will she ever get answers? Or should some secrets be taken to the grave?

When yet another attack leaves the students of Guilder University looking for answers, Aria decides to take matters into her own hands. Armed with a set of powers she’d vowed never to use, she follows the clues to the killer—only to find that nothing is as it seems.

The world is changing. Alliances are shifting. And the very foundations of the supernatural community are at risk. Like it or not, people are starting to take sides.

But will Aria and her friends find themselves on the right side of the fight? Or are some sins too big to come back from?