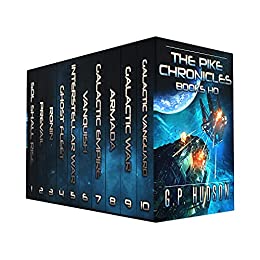 The 1st 10 hit space operas from The Pike Chronicles:

The Sol System was conquered and humans lived as slaves for 500 long years.

Now, after years of brutal warfare, humanity has been liberated. Liberation, however, comes at a cost, and the Sol System has become nothing more than a puppet state for a vast galactic empire.

For Jon Pike, a war hero who has lost everything, there is no substitute for freedom. He blames the aliens for humanity’s troubles, especially the one living inside him.

But when he is sent on a top secret mission into unexplored regions of the galaxy he discovers that humanity’s troubles are just getting started.

Can he find freedom for himself and humanity?