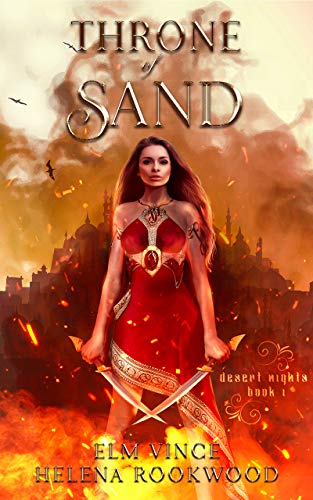 By: Elm Vince | Helena Rookwood
A princess with a secret. A djinni without a past. A love that could save a kingdom...
Genre: Fantasy | Library | Teen & Young Adult
Series: Desert Nights
Pages: 274
Asian Myth
Amazon Books

Zadie knows she’s nothing like your typical princess. She spends her days reading, riding, and sneaking out of the palace. But between her beautiful elder sister who’s betrothed to a powerful sultan, and her younger brother who’s heir to the throne, nobody seems to care what she gets up to. Until now, that is.

When Zadie helps her sister abandon her engagement to marry for love, it falls to her to play the part of the perfect princess in her place, traveling to the neighboring kingdom of Astaran with the handsome, arrogant sultan she is to marry.

But no sooner has she left her home, Zadie faces a whole new set of troubles. Bandits stalk the desert towns, the palace is under threat from an infamous band of thieves, and there are whispers that the sultan searches for more than just a new bride to magically protect his kingdom’s borders. All is not as it seems in Astaran.

And it’s fast becoming clear to the palace that this promised princess isn’t all she seems, either.

With her secrets piling up, can Zadie prove her true worth to the sultan and his ever-watchful vizier? If she doesn’t, the fate of more than one kingdom hangs in the balance…