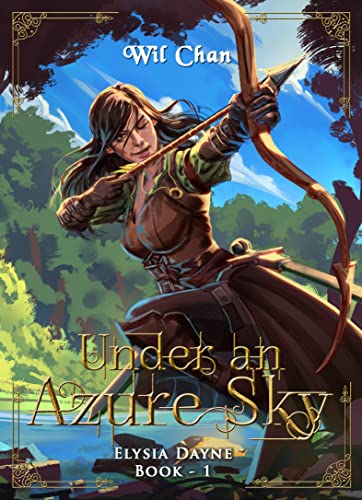 Under an Azure Sky

By: Wil Chan
Elysia Dayne: Hero. Mercenary. Dragon slayer. At least that's how the bards tell it. But that wasn't always the case. There was a time when she thought that dragons were beautiful.
Genre: Fantasy | Library
Series: Elysia Dayne
Pages: 448
Epic Fantasy | Sword & Sorcery
Amazon Books

When she was a child, she believed that she was friends with a dragon. Except, the dragon knew of no such friendship. Soldiers arrived to slay the creature so that a feudal lord could make his name amongst the Nine Kingdoms. It ended in abject failure. They were left to soak in a bloodbath of their own making. In a rage, the dragon destroyed the place that she called home, and killed the people that she called family, also dismantling a thing called love. Reborn under a mound of ashen corpses, her empty shell vowed vengeance, forging a fiery path of retribution that could not be undone.

Not by her own design, she becomes a slayer of dragons. Curiously, dragon slaying isn’t her next job. A princess is being held for ransom at a goblin fort. Wearing the stolen armour of a goblin knight, she attempts to rescue the princess to claim her bounty. Her plans are somewhat botched by the uncooperative royal, and the two of them end up wandering through the wilderness towards civilisation. What they don’t realise is they are being tracked by Niemirian raiders who are intent on killing them both.