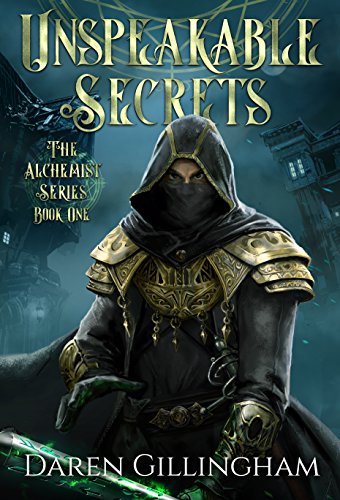 Connor Varas just learned that he will one day be able to bestow the strength of giants on anyone he pleases. One day he can create as much gold as he wants. One day he can build an army of metal soldiers that no kingdom could stand against.

But, staying alive until then is going to be a challenge.

Because, if anyone finds out what he is they’ll do anything to sway him to their cause. Or stop him from joining the enemy.

He can’t die of old age, but what good is that when surviving until tomorrow seems like an impossible task?

Is this book for me?

If you like worlds bursting with magic, desperate sword fights, deadly enemies, and heroes that get increasingly powerful, then you’re going to love Unspeakable Secrets.

So, join Connor Varas as he struggles to master his newfound power, uncover the sinister plots that threaten his city, and stay one step ahead of death.

His quest will take him through the darkest parts of Vigil’s underworld. Through oceans of blood. And, into the festering heart of a plot that threatens to swallow him whole. All while dodging ice orbs, lightning bolts, and the less than restful dead.

So what are you waiting for? Get the book and begin your adventure in the world of Unspeakable Secrets.

How long is the book?

Just the story itself is over 84’000 words. No filler. No padding. All for your reading pleasure. Page count is 342 pages.

The red glow intensified. He wanted to run, but his body wouldn’t respond. He couldn’t even twitch. Paralyzing magic? Just what kind of trap had he sprung?

He couldn’t even blink. He could only watch… and accept his fate.

The thugs he’d killed only moments ago shambled toward him. They moved awkwardly, like puppets jerked by invisible strings and lacked any of the grace or skill they had in life.

He thrust his rapier at the closest of the two and skewered it through the heart. It didn’t even flinch.