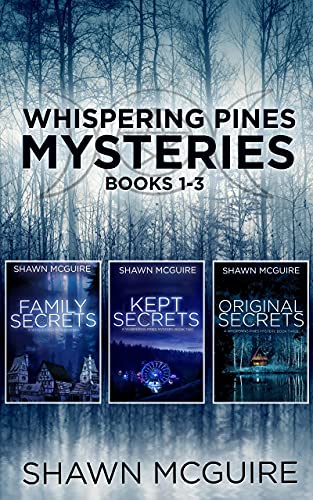 This digital box set contains books one, two, and three.

Family Secrets
Former detective Jayne O’Shea goes to prepare her grandparents’ lake house for sale and finds a dead body in the backyard. When it becomes obvious the sheriff isn’t going to investigate the death, Jayne jumps right in. Her list of suspects grows faster than the plants in the village commons’ pentacle garden. Could it be the local Wiccan green witch with her stash of deadly plants? The shopkeeper who foretells death? Or maybe the visitor determined to learn black magic?

Kept Secrets
One month after arriving in the Northwoods, Jayne has settled comfortably into small-town life. Then one of the circus performers is found dead, and the villagers look to Jayne for help. The last thing she wants is to get involved but when a second carney dies, and the newly hired sheriff dismisses the death as an accident, Jayne has no choice but to step in.

Original Secrets
Exhausted from being the only law enforcement official on duty while also trying to open a bed-and-breakfast, Jayne escapes into her grandmother’s journals. Each entry gives her a deeper understanding of why her grandparents moved to such a remote location. But as questions are answered, deeply hidden secrets are unearthed. Such as, a killer has been wandering the village for forty years.