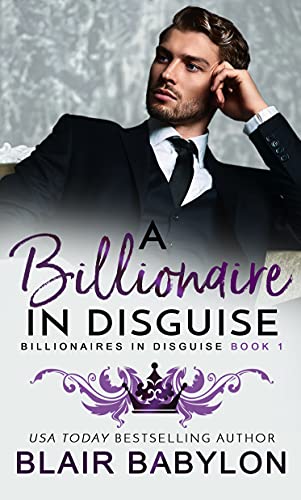 A Billionaire in Disguise

By: Blair Babylon
Everyone tells you that a reckless tryst at a party will ruin your life, but somehow I ended up with a hot billionaire with a royal secret.
Genre: Library | Romance
Series: Billionaires in Disguise
Pages: 200
Romantic Comedy | Romantic Suspense
Amazon Books

I’m just a small-town girl, and I messed up and lost my college scholarship. I was broke.

But then I met tall, ripped, tantalizing Wulf, whose sapphire-blue eyes warmed when I was joking around while we waltzed, and I did something that anyone would tell you is stupid.

I found out that night that he was ripped under his tuxedo, with broad shoulders and biceps like steel.

And then I found out he was wealthy. Not rich. Wealthy.

I’d already figured out he was into some wild stuff.

But he was more than I thought. So much more.

And that was the problem.

I fell in love with him that night, the night he saved me, and then I was the one who was screwed.