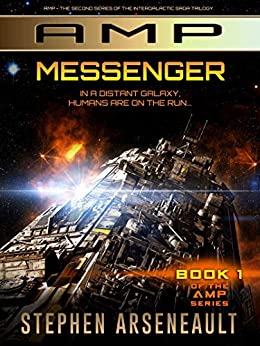 By: Stephen Arseneault
In a distant galaxy, Humans are on the run. An insane species follows. They will not stop... ever.
Genre: Science Fiction
Series: AMP
Pages: 234
Colonization | Hard Science Fiction | Space Fleet
$4.99
Free
Amazon Books

Trapped on an immense station with limited resources, our only option has been to flee. Years of peace are over. War is again coming to the Grid. This time however, humanity will stand and fight.

The exciting eight-book AMP series chronicles the struggles of Don Grange, a simple package deliveryman, who is thrust into an unimaginable role in the fight against man’s enemies. Can we win peace and freedom after a thousand years of war?

Continuing as a legacy of the SODIUM series, the story picks up a thousand years into the future. Don’t just sit at home scratching your head about what to do because you are bored, go on a mental rampage, travel the stars, take a risk and dive head-first into this non-stop-action saga!