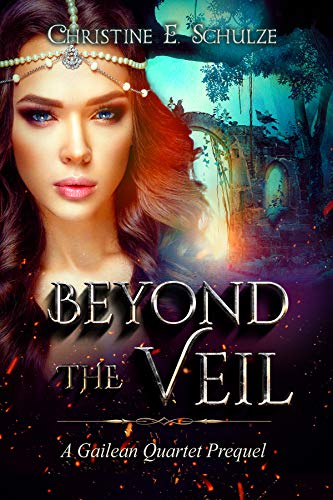 Gillian of Adelar has spent her whole life stuck behind her society’s walls. Fed up with her horrible and forced betrothal, the young woman’s only solace for the lonely song buried in her soul lies in her people’s few surviving artifacts. Needing an escape, she steps through an outlawed enchanted veil…and meets a handsome knight riding a majestic gemstone-eyed eagle.

After returning home with only his secret letters to keep her passion alive, Gillian fears the prejudices between their realms could mean a violent end to their off-limits love. But when the furtive correspondence suddenly dries up without a word and her father moves her looming nuptials closer, she’s forced to take action or be doomed forever.

Will their desires defeat a poisoned history and sing a magical happily ever after?

Beyond the Veil is a spectacular standalone YA fantasy romance and prequel to The Gailean Quartet series. If you like bold characters, beautifully detailed worlds, and ancient rivalries, then you’ll adore Christine E. Schulze’s peek behind the curtain.