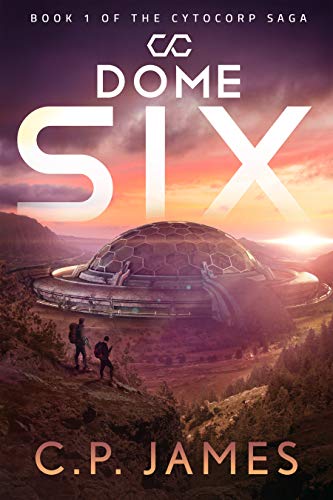 By: C.P. James
The nature of a strange signal leads a young tech apprentice and his uncle to question all they know about their utopian refuge. Now, they must solve the biggest mystery of all: Is there a way out of Dome Six?
Genre: Action & Adventure | Library | Science Fiction | Teen & Young Adult
Series: The Cytocorp Saga
Pages: 370
Dystopian
Amazon Books

Cytocorp sold the Dome Project as a way to protect America’s best and brightest from the rapid advance of a deadly climate event. When they lost contact with the outside world, all they could do was wait and hope. But four generations later, Dome Six is still waiting, and hope, like everything else, is in short supply.

Owen Welsh is a Technician’s Apprentice who keeps the Dome humming under the watchful eye of his uptight adoptive mother. When his unhinged uncle, Hideki, draws him into an insane theory, he quickly finds himself on the wrong side of the law.

As accidents and malfunctions pile up, Hideki’s conflict with the ruling Authority escalates. While the noose tightens around his uncle, Owen sleuthing reveals a web of lies. But who’s spinning it and why?

Unlikely allies join Owen’s cause in a desperate race to save Hideki’s life and get out of the Dome before it crumbles on top of them. Will they find the way out before it becomes their tomb?