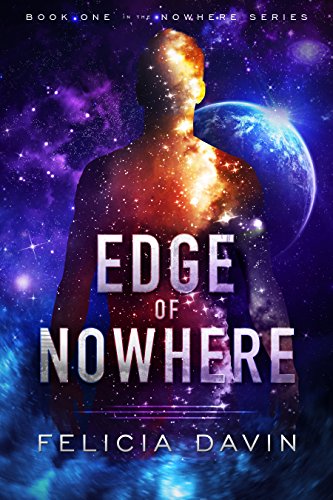 By: Felicia Davin
Kit Jackson has two talents in life. He can navigate the void known as the Nowhere to teleport himself across long distances and he can keep his mouth shut.
Genre: Action & Adventure | Library | Science Fiction
Series: Nowhere
Pages: 230
LGBTQ+ Science Fiction | Science Fiction Romance
Amazon Books

These talents have earned him a reputation as a discreet, reliable Nowhere runner—he’ll smuggle anything for the right price—and that’s how Kit likes it. Morals don’t earn money, and neither do friends. When the private research firm Quint Services makes Kit an astounding offer for a mystery delivery, he says yes.

The parcel turns out to be an unconscious man, and even for Kit, that raises questions. When something monstrous attacks them in the Nowhere and throws them into an unknown wilderness, Kit and this stranger, a man named Emil, have to rely on each other. Kit just wants to make his delivery and get paid, but he finds himself increasingly entangled in Quint Services’ dangerous research—and his own attraction to Emil.

Emil Singh left his career in the Orbit Guard to work at Quint Services Facility 17, a base hidden in an asteroid, to prepare a team to cross the Nowhere into other worlds. It’s the chance of a lifetime and he can’t wait to explore the universe. But then Emil witnesses a terrible accident in a Facility 17 lab and gets sent to Earth for questioning. Something isn’t right, but before Emil can investigate, he and the Nowhere runner hired to transport him are knocked off course. Is the monster that attacks them a creation of Quint Services? What else is the corporation hiding? He has to get back to Facility 17 to protect his team and he needs Kit’s help. Can he trust the cynical young smuggler?