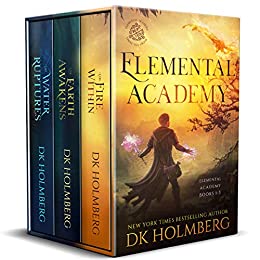 By: D.K. Holmberg
The power of the element bonds flows through the lands of Terndahl. Shapers can control that power and use it.
Genre: Action & Adventure | Fantasy | Library
Series: Box set
Pages: 961
Coming of Age | Sword & Sorcery
Amazon Books

With the threat of rogue elementals escaping from the element bond and fear of another attack by the Draasin Lord, life at the edge of Terndahl is difficult for Tolan. Without any magic of his own, he spends his days working a menial job as a carpenter’s apprentice. When an elemental attack draws the attention of the Inquisitors from the Academy, everything changes.

A mistake brings Tolan into the Terenhall Academy, a prestigious training ground for powerful shapers, but it’s a world where he doesn’t belong. Unlike his classmates, he can’t control the magic of the element bonds.

With no shaping ability, Tolan must find the fire within himself to succeed. If he can’t, he’ll not only be forced to leave the Academy, but the dangerous Draasin Lord might gain the very power he’s long sought.

This boxset contains the first three books of the bestselling Elemental Academy series!
The Fire Within
The Earth Awakens
The Water Ruptures