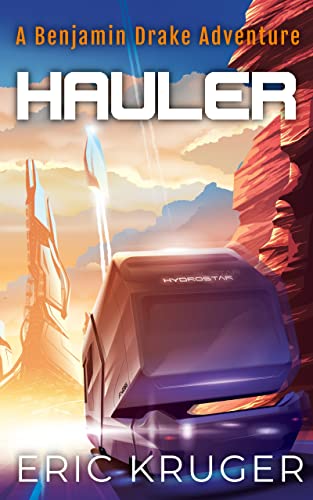 Earth is no longer made up of countries and nations. Every bit of land has been privatized, and most of it is owned by five big corporations. Life is hard, and people are struggling. Crime is rampant, and they send serious offenders to Mars to help with the terraforming.

Benjamin Drake is a happy-go-lucky truck driver (or hauler) with an uncomplicated life, hauling cargo around the world in his Hydrostar, until a run of bad decisions leaves him without work. Down on his luck and desperate for a contract, he makes a decision that he instantly regrets. As Drake gets caught in a tug of war between a mining mogul and the world’s most ruthless security force, he suddenly finds himself with a truck full of stolen cargo, and decisions need to be made. But who can he trust?

After a big professional blunder, Lt. Lily Wells plots a way to get her career back on track as one of Penta Corporations’ top security officers. But when Wells ends up on a murder case, she uncovers something much bigger.

One on the run and the other on the hunt, Drake and Wells cross paths, at odds and supposedly enemies. But could their alliance be the only way out alive?