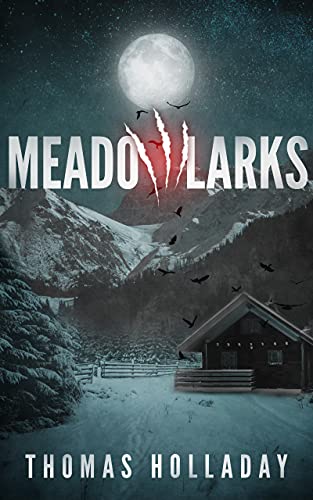 As family relationships, heritage, neighbors, and deadly forces intersect, evil becomes apparent in not only an unleashed supernatural beast, but in the hearts of men. Rural roots, supernatural horror, Native rituals, and family relationships blend seamlessly to build a nicely-paced drama that comes full circle for elderly Native John Crow, whose new neighbors have now become part of this sacred valley and its long-standing ritual practices, changing their lives forever. Meadowlarks is especially recommended for fans of Tony Hillerman-style intrigue who seek a vifgorous dose of the supernatural added into a mix of mystery and interpersonal struggle. Diane Donovan, Midwest Book Review All Carolyn Potter wanted was a safe haven in which to raise her son, Jason, not to find a night stalker lurking in the forest surrounding their new mountain home. Following the unsolved murder of her husband and a violent attack on her son, Carolyn Potter learns she has inherited a cattle ranch located in a remote valley high in the Sierra Nevada Mountains. She eagerly leaps at the opportunity to escape urban violence, move out of her oppressive mother’s home and get away from her hungry eyed, lip licking employer, Tom Kirby. Kirby, buried under gambling debts, is destroying Kirby Publications, a company built by his deceased father. Learning of Carolyn’s inheritance compels him to win her favor in order to marry into her newfound wealth but Carolyn chooses Shangri-la, her dead husband’s family ranch. Carolyn and Jason love their new home but soon learn of a local ritual being practiced on their land where a bull calf is brutally slaughtered with each cycle of the full moon. Seeking to end this gruesome practice, Carolyn saves the young calf and unleashes a monstrous creature, not realizing this creature is the protector of Shangri-la. After the creature attempts to break into their home, Carolyn calls on Tom Kirby for help. Kirby zooms to the rescue to confront the beast, rescue the girl and inherit her wealth, with which he intends to regain his prowess as a winning gambler. After her complete failure to end the slaughter of both bull calves and her neighbors, Carolyn must now decide whether to move back to civilization, stay and try to defeat her new threat or accept a bloody ritual that keeps the beast at bay.I loved this book! Intimate, rich, fascinating characters climbed into my life and took over as I greedily devoured every bit of action and all the chills . . . A must read! I am already hungry for more. Catt Dahman, best selling author of When We Were 8 and Alice and Friends.