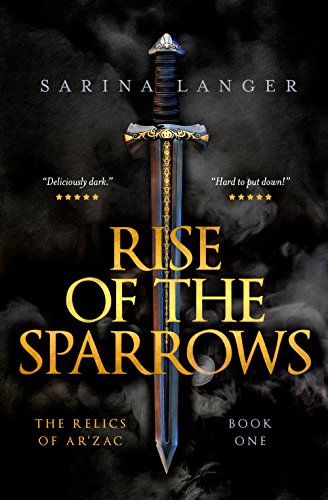 Rise of the Sparrows

By: Sarina Langer
A cursed omen who dreams of death. A girl who calls fire with a wish. A group of resistance fighters who need the king to die.
Genre: Fantasy | Teen & Young Adult
Series: Relics of Ar'Zac
Pages: 344
Dark Fantasy | Epic Fantasy
$2.99
Free
Amazon Books

Prophecy has brought them together, but will it destroy them too?

Rachael is no stranger to struggle: her parents abandoned her when she was five, she is homeless, and the villagers avoid her because they fear her prophetic dreams. Rachael is okay with that—if they leave her alone, they won’t harm her, and she can look after herself. But then she meets Cephy, and Cephy isn’t used to being away from her mother’s warmth.

When her father beats Cephy again, she burns the house and her family down with her magic. The scared villagers call on the White Guard to take them away and execute them, but neither girl is ready to die. Together, they escape into a world they know nothing about… towards a Mist Woman with dark plans and a resistance plotting regicide.

Rachael wants only to live in peace, but the resistance needs her, and it promises a better tomorrow for all magically gifted. It’s everything Rachael wants and more…
But is she prepared to commit the ultimate crime and claim the throne to get it?

If you like plot twists, kickass heroines, and dark destructive magic, then you’ll love the first instalment in this page-turning epic fantasy trilogy.