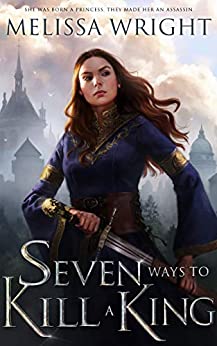 Seven Ways to Kill a King

Myrina of Stormskeep was dead. Everyone knew the princess had been slain when the murderous lords of the Storm Queen’s Realm stole her mother’s throne to crown themselves kings.

But far away in Smithsport hides a dark-haired girl known as Bean. Each night when the last flame is snuffed inside the Blackwater Inn and her need for secrecy devoured by the darkness, Princess Myrina plots the death of seven kings.

One will seem an accident.
Two a coincidence.
By three, they will know.

But vengeance rarely goes according to plan. The worst of the kings holds her sister–rightful queen and heir to the realm–captive. If Lettie isn’t freed before she comes into her magic, the kings will hold her power as well.

Myrina can let nothing stop her, even the boy from her past who ignites feelings she long ago buried. With the help of her loyal bloodsworn Cass, the shadow princess will have her revenge.

Vowed to enact retribution and rescue her sister with no more than her wits and a sword–and the last of her queensguard–this YA fantasy is perfect for fans of Shielded and The Princess Will Save You.