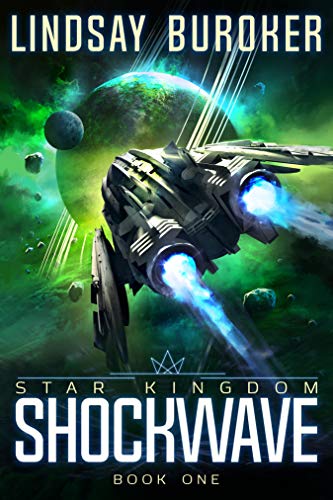 By: Lindsay Buroker
What if being a hero was encoded in your genes? And nobody told you?
Genre: Library | Science Fiction
Series: Star Kingdom
Pages: 290
Galactic Empire | Space Opera
Amazon Books

Casmir Dabrowski would laugh if someone asked him that. After all, he had to build a robot to protect himself from bullies when he was in school.

Fortunately, life is a little better these days. He’s an accomplished robotics engineer, a respected professor, and he almost never gets picked on in the lunchroom. But he’s positive heroics are for other people.

Until robot assassins stride onto campus and try to kill him.

Forced to flee the work he loves and the only home he’s ever known, Casmir catches the first ship into space, where he hopes to buy time to figure out who wants him dead and why. If he can’t, he’ll never be able to return home.

But he soon finds himself entangled with bounty hunters, mercenaries, and pirates, including the most feared criminal in the Star Kingdom: Captain Tenebris Rache.

Rache could snap his spine with one cybernetically enhanced finger, but he may be the only person with the answer Casmir desperately needs:

What in his genes is worth killing for?