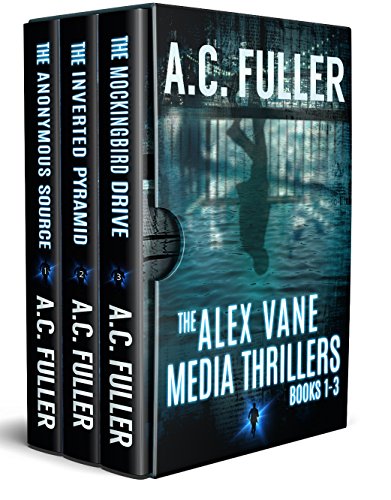 One year after the 9/11 attacks, Alex Vane–a brilliant, fitness-obsessed reporter for The New York Standard–wants nothing more than to break into the flashy world of TV news. But when he uncovers the scoop of a lifetime, his tightly controlled world is rocked: his editor buries his story, a source turns up dead, and Alex finds himself at the center of a violent media conspiracy.

As he receives tips from a mysterious source, Alex enlists the help of a captivating professor, Camila Gray. Aided by an Internet genius, a billionaire’s sexy widow, and a washed-up sports reporter, Alex and Camila discover a $500-million secret that could derail the largest media merger in history.

Uneasy Lies the Head that Wears a Crown.

Journalist Alex Vane has finally found stability. He’s living with a fiery massage therapist and co-managing a website that investigates the inner workings of the media. But when he breaks a story detailing low-level political corruption in Washington, a source hints at a vaster conspiracy, one that may reach all the way to the top of the fast-approaching 2004 presidential election.

At a conference in Seattle, Alex runs into an old friend–and flame–Media Studies Professor Camila Gray. But just as they begin to reconnect, Alex’s business partner disappears, leaving Alex only one clue: the name of a hacker who was recently murdered in New York City.

Alex and Camila travel to Alex’s hometown, where they race to untangle a web of connections between the dead hacker, the disappearance of Alex’s partner, and the death of Alex’s parents seven years earlier. But all the while, a mysterious source is pulling the strings of their investigation, of the election, and possibly of their lives.

Data Never Dies. But People Do.

Alex Vane was once a top investigative journalist. Now he peddles celebrity gossip and clickbait listicles, watching from a distance as his wife moves on with her life – without him. Alex’s past catches up with him when he learns that an old source, James Stacy, has been killed in a random mass shooting.

But James left Alex one last scoop: a 50-year-old hard drive that may contain a secret worth killing for…and the name of the one person who can help him access the data. That person is Quinn Rivers, a paranoid and reclusive computer expert who believes the CIA is tracking her every move. And she may be right.

When Alex shows up at her door with the hard drive, armed operatives are right behind him. Now Alex and Quinn are on the run. There is no one to trust, nowhere to hide, and nothing but the hard drive to prove that James Stacy’s death wasn’t random at all.