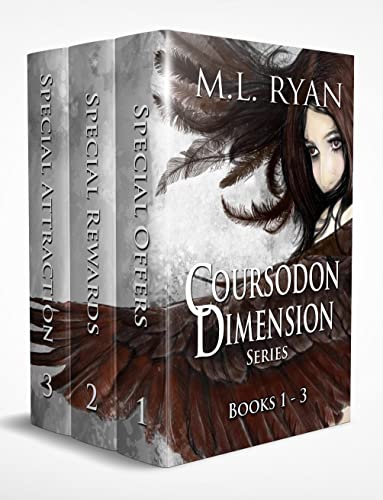 Special Offers
She finally has a man inside her.
Just not the way she imagined.

But when she gets her new Kindle it includes more than a reduced price in exchange for a few ads.

It arrived pre-loaded with a 240-year-old enforcer from another dimension.

Not only are his wants and needs beginning to impact her own, the arrogant bastard won’t shut up.

Can Hailey find a way to return her infuriating cohabitant to his own body, or be forced to listen to the non-stop banter in her head forever?

Special Rewards
Borrowed magic. The gift that keeps on giving.

Hailey used to be an average, everyday human.

After being possessed by Sebastian, a magically inclined enforcer from the parallel dimension of Coursodon, her life took a decidedly less mundane turn.

Besides coming to grips with the existence of supernatural beings, she risked her life helping Sebastian, and her heart falling for his protégé, Alex.

Now, Hailey has to deal with the bit of arcane power that Sebastian left behind when he returned to his own body and try to stay out of the crossfire when an unknown assailant seeks revenge against Alex.

Thanks to a “magical transplant” from inter-dimensional enforcer Sebastian Kess, Hailey Parrish can transform into a hawk. When someone begins dismembering hikers along the Appalachian Trail, Sebastian and Hailey’s main squeeze Alex Sunderland make use of her feathery talents to pursue the killer.

Unfortunately, like most things in Hailey’s life, there is nothing ordinary about the assignment.

Their target turns out to be maddeningly elusive, they rescue a stray dog that makes a sewage treatment plant seem pleasantly fragrant, and stopping the murders turns out to be the least of their worries.