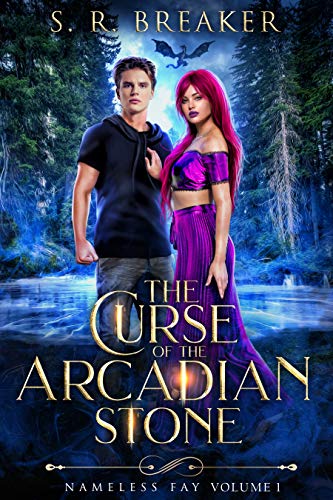 The Curse of the Arcadian Stone

By: S. R. Breaker
She was solely created to guard a legendary relic. But when a rogue thief from Earth disrupts her dreary world, her job won't be the only thing she loses.
Genre: Fantasy
Series: Nameless Fay
Pages: 119
Epic Fantasy | visionary & Metaphysical
$1.99
Free
Amazon Books

There’s only so much for a bored three-thousand-year-old fairy to do in the forest.

A nameless fairy dubbed “Magenta” knows she only exists to serve a specific purpose. To guard the most powerful relic in the land of Arcadia. And for thousands of years, she’s succeeded in fending off even the most dangerous of threats.

But when a rogue stranger from Earth offers her something much more precious in exchange for the relic, will she accede even if it risks her very existence?

Josh Richards is nothing if not resourceful. But it still took him nearly a year to find the one thing powerful enough to ensure his much overdue return to Earth. And if a little deception is all he requires to finally get his hands on it, how bad could the consequences really be?

The last thing Josh needs is a snarky forest fairy with a vendetta. So why can’t he just seem to leave her behind?