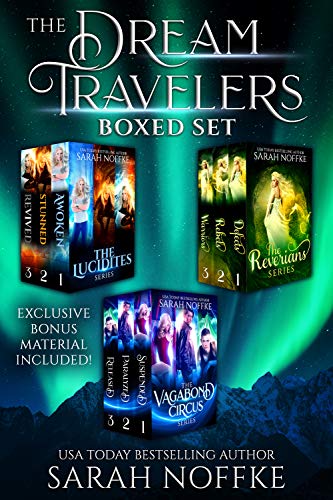 The Lucidites Trilogy:
Around the world humans are hallucinating after sleepless nights.

In a sterile, underground institute the forecasters keep reporting the same events.

And in the backwoods of Texas, a sixteen-year-old girl is about to be caught up in a fierce, ethereal battle.

She drowns every night in her dreams, spends her hours reading classic literature to avoid her family’s ridicule, and is prone to premonitions—which are becoming more frequent. And now her dreams are filled with strangers offering to reveal what she has always wanted to know: Who is she? That’s the question that haunts her, and she’s about to find out. But will Roya live to regret learning the truth?

The Reverians Trilogy:
Fans of Divergent and The Hunger Games will enjoy this series which follows a strong female heroine in a world where the government appears to be doing what is best for the people, but is secretly hiding a horrible truth.

Its ringmaster knows it. The performers know it. And the one person who can save the circus, knows it.

There are no smoke and mirrors in this show.

No nets or wires. The magic is real. And so is the murderer who lurks somewhere under the big top.
The ringmaster and the crew must work together to discover who is trying to ruin the place they love more than any other. Full of mystery and intrigue, this circus will transport readers to another place.

Can you figure out who the murderer is before it’s too late?