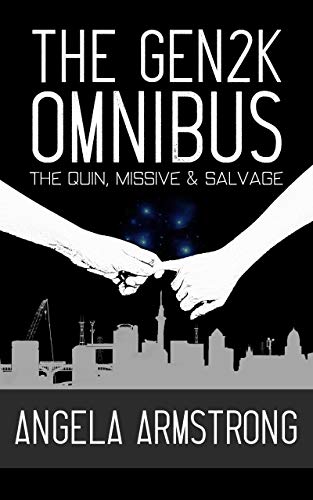 Meet Generation2K. AKA: The last 2000 alive. Most Gen2Ks are busy exploring Republic-sanctioned Matches in a last bid to save the human race. A few opt to operate on the fringe — away from the buzzkill that is the fertility crisis. That is, until fate has other ideas. Three fringe Gen2Ks, three stories, one volume.

1. The Quin
Tama is broken. Then again, everyone left in the last clean city is. But Tama is more broken than most – which makes for wicked irony that he works in restoration, of all places. Broken Tama fixes things. He’s good at it though – good enough that he can almost forget how bad things are — for everyone — and how lonely being broken is. That is until Bex needs something restored. Every encounter with Bex lights up parts inside of Tama he had no idea needed fixing.

2. Missive
Tama discovered recently he is an old-fashioned romantic. So how does an old-fashioned romantic woo the light-bringer, Bex, in a city where everything is broken but the tech? Text, audio, photo and video messages are transmitted almost instantly; there’s not much charm in that. So begins Tama’s scavenger hunt for old-world paper to bear his secret missives. The last clean city hasn’t seen courtship like this for over a century.

3. Salvage
Geronimo works the salvage yards. He’s the best borer around. For Geronimo, “finders, keepers” has always made good sense. It pays when you’re good at finding. Minding his own business and amassing his stash was simple, so long as he kept his rules. The stash was safe. His. Keeping the rules was easy until Tama. One deal with a love-struck trader serves Geronimo a whole lot more than he bargained for.

Praise for The Quin:
A gripping dystopian love story set in a decaying urban world. I was reeled in by the beautiful writing, the way mundane objects become objects of wonder. The romance is tender, heart in your mouth hope for the central characters. As the plot reveals the larger issues of the world of the story regarding fertility and a dying population everything ramps up. The matter of the Quin is heart-rending, page-turning business.