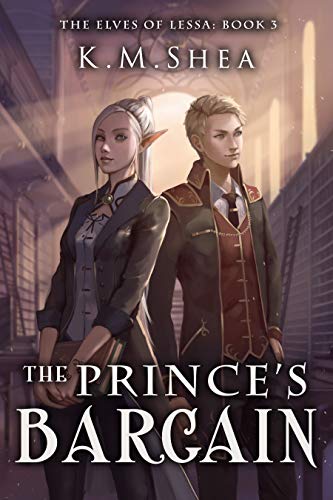 By: K.M. Shea
All Myth ever wanted was to graduate and work for the trade department. Instead she’s chosen to serve as the personal translator for Crown Prince Arvel.
Genre: Fantasy | Library
Series: The Elves of Lessa
Pages: 314
Clean & Wholesome Romance | Fairy Tales | Sword & Sorcery
Amazon Books

Myth is well versed in trade, economics, and the languages needed to discuss them. Royal families and politics? Not so much.

But Prince Arvel needs an elvish translator, and Myth—with her knack for languages and love of books—is the best option.
Crown Prince Arvel requires her help because he’s holding an investigation against his uncle. He’s locked in a political battle that he has to win, or the government will fall.

But as the two work together through subterfuge, dazzling balls, and assassination attempts, Myth and Arvel grow closer than any employee and monarch should.

The real danger begins, however, when Arvel’s uncle discovers the charming prince has a weakness: Myth.

Can a book-smart translator and a sly crown prince save the kingdom? Or will their relationship ruin everything they’re fighting for?

THE PRINCE’S BARGAIN is a clean romance set in an epic fantasy world filled with elves and magic. If you love sweet romances, humorous characters, and court intrigue you’ll love the Elves of Lessa series. Download a sample or buy it today!